The Godfather 3D Game Board

We have been thinking long and hard about upgrading this game, mainly because this game from CMON is one of our favorite games to play for some years now. The Godfather: Corleone’s Empire is easy to explain, and therefore we can have new people playing it in no time, it has smooth game mechanics and great strategy elements to it.

This game is part of Eric Lang’s famous trilogy (along with Blood Rage and Rising Sun), but I feel like this title has been overshadowed greatly by the other two titles. Perhaps because the Godfather was released outside of Kickstarter, where the other had great success on the crowdfunding platform. Or perhaps the gangster theme is less popular than Vikings and feudal Japan. Nonetheless, we would love to create some extra well-deserved buzz around this game.

For this game upgrade, we decided it would be best to create something that could be used on top of the game board. We decided on making separate 3D printable sections per city area, holding each other together like puzzle pieces. Not only does this option allow for the great artwork of the board to still come through, but also the essential areas for shop tiles would stay in place. All this is clipped to the board so it doesn’t move while playing.

If you’re curious about the steps after 3D printing, make sure to check out the tutorial.

Are you ready to 3D print this awesome board game upgrade for your game? Get your 3D files now by clicking on the button below. 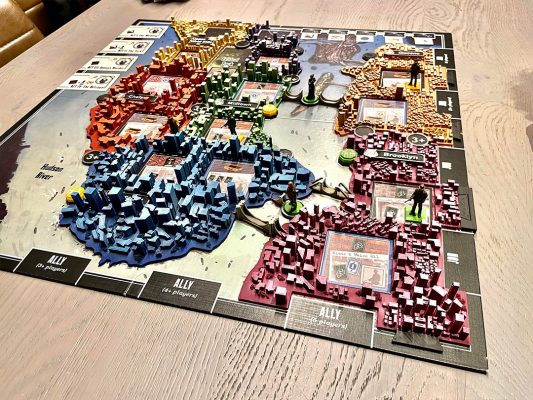 In these posts we talk about our personal projects, involving painting miniatures, terrain building, 3D printing and more. Don’t worry if you’re new to all of this, we provide tips & tricks and tutorials so you’ll know how to handle your next hobby project.