COVID-19 - We are happy that we are able to continue international shipping with regular shipping times. Stay safe! Dismiss 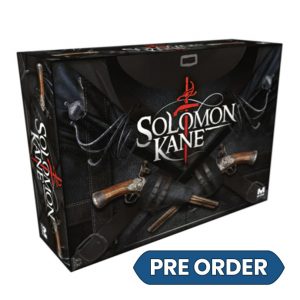 Solomon Kane is a novel-based fantasy board game for 1 to 5 players. It plays in about 60-120 minutes and features game mechanics like variable player powers, storytelling and dice rolling.

Based upon the stories by Robert E. Howard (creator of Conan), Solomon Kane is a narrative adventure board game featuring exceptional 35mm miniatures. It is a highly innovative co-operative game of storytelling, resource management, and tactical miniatures play. Players take the part of the invisible powers of good and light who aid Solomon Kane in his quest to overcome the forces of Darkness. Each player is one of the four Cardinal Virtues: Courage, Prudence, Temperance, and Justice, each with special powers that reflect their unique role.

Drawing upon Howard’s famous tales of the Puritan avenger, the core box allows players to tell their own versions of the Rattle of Bones, Skulls in the Stars, and Blue Flame of Vengeance. Expansions recreate Howard’s other Solomon Kane stories, as well as adding original adventures for the hero, created especially for the game.

In Solomon Kane, each of Howard’s tales is told as one or more Acts, with each Act comprising a full game session. Shorter stories like Rattle of Bones can be completed in a single session, whilst longer tales will take multiple sessions to play through.

An Act is broken down into 8-10 Chapters, and each Chapter has multiple possible outcomes depending upon the actions of the players. Some Chapters offer story choices, whereas others see the action play out on the game board as the players work together to aid Solomon Kane in his quest. Narcos: The Board Game